You are here: Home / Suicide / “Guardians of The Gate” — A Band of Brothers Saving Suicidal Lives at The Golden Gate Bridge 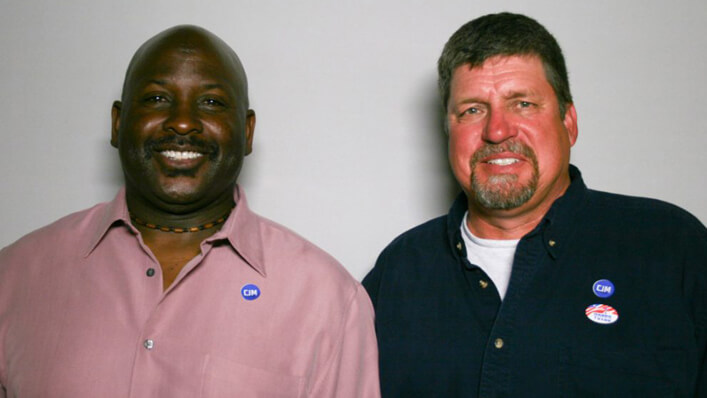 Since it first opened to traffic in May of 1937, the Golden Gate Bridge has become an iconic American landmark. San Francisco locals proudly boast over it, while tourists from near and far sport everything from t-shirts to key rings with the emblematic red arches.

Though the Golden Gate Bridge often draws tourism traffic, along with daily commuters, the suspension bridge also notoriously draws guests for a much more tragic reason.

Not the kinds of guests who come to take in the views of the Golden Gate, or get in a Monday morning run across the mile-long suspension bridge. Instead, the American icon draws those who have reached the end of their rope.

Since it’s opening in 1937, an estimated 1,600 bodies have been recovered of people who have jumped from the Golden Gate Bridge. The problem has become so bad in fact, that the bridge has several signs posted along its route with information about contacting the National Suicide Hotline.

An ironworker in the San Francisco area, Ken spends his days off attempting to talk potential “jumpers” off the ledge. He says over the years, he’s saved over 30 people from taking the irreversible plunge to their death. He’s even recruited the help of some fellow ironworkers, who believe they are the best equipped both physically and mentally to take on these suicidal strangers.

They call themselves the “Guardians of the Gate,” and some of their skills include bear climbing across the steel beams and crossways—something they’re used to doing on the job.

Ken says that the most important resource they have is compassion.

Simply being able to listen to someone who is in distress, and experiencing the deepest depths of despair is often enough to change the person’s mind.

Read Next On To Save A Life
Kate Spade, Iconic Fashion Designer, Dies at 55 of Apparent Suicide

“You try to help them get some peace of mind,” Ken said in an interview in 2001. “Over the years, [suicide prevention experts] have come to give us seminars. They wind up asking us questions, because all they do is talk to these [suicidal people] on the phone. We deal with them face-to-face.”

Of course, for as many “wins” as Ken has had over the years, he’s no exception to the sorrow, having experienced several suicides take place in his presence.

He notes Steven Page, who, on January 28, 1993, killed his wife with a shotgun before fleeing to the bridge. It was there under the red arches that Ken watched as Steven hurled his three-year-old daughter over the side of the bridge before leaping to death himself.

“There’s no describing how helpless you feel,” Ken says of watching someone fall to their unnecessary death.

Though he can count how many lives he’s saved on the bridge, Ken says there’s always a lingering uncertainty as to whether that person is actually safe. He has no way of knowing if an averted jumper relocated and attempted the same thing another day.

Still, the Guardians of the Gate find comfort in knowing they’ve done all they can to save a life.

“We’re the only ones dumb enough to do it,” Ken says. “Once in a great while one of the guys will get a letter or note from someone they talked down. I’ve known that to happen only two or three times. When a guy gets a letter like that, it’s a treasure; it’s like gold.”