Oakland Raiders quarterback Derek Carr made headlines in June when he signed the richest contract in NFL history. Better than signing the historical contract was Carr’s response when asked what he’d use his $125 million for over the next five years.

“The first thing I’ll do is pay my tithe like I have since I was in college,” Carr told CBS Sports. “Giving $700 on a scholarship check. That won’t change. I’ll do that.”

His response is a reigning example of the obedience God calls us to in giving of our finances. But tithing is just one of the many ways Carr strives to obey the Lord in his everyday life—both on and off the football field. 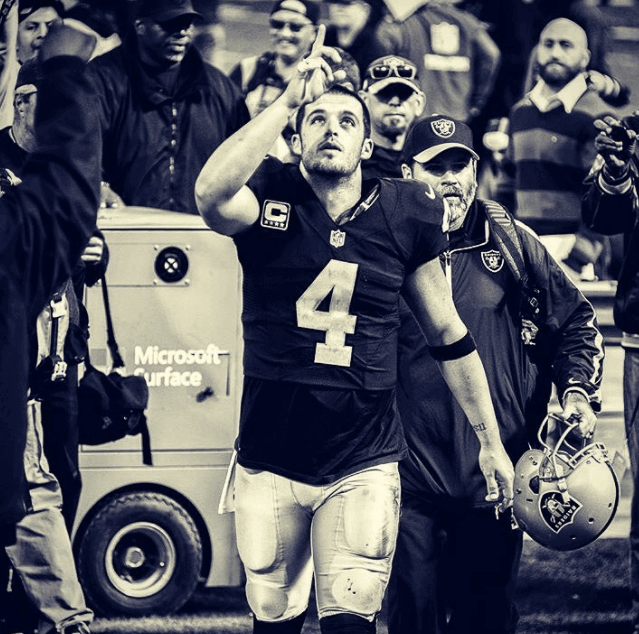 Having never been shy about his faith, Carr reveals in a video posted by Play4Him a time when he first made a commitment to seek the Lord every day and live in obedience to the commands of the Holy spirit.

“Seek the face of the Father to see what he wants you to do—every single day,” Carr recalls his friend Matty Montgomery telling him.

The funny thing about God is, He’s got a great sense of humor.

Wouldn’t you know that immediately after making that commitment, the Holy Spirit showed up and prompted Carr to step out in faith and obedience.

The quarterback tells the story of a time when he and his brother were at a church speaking event, and the pastor held an altar call. 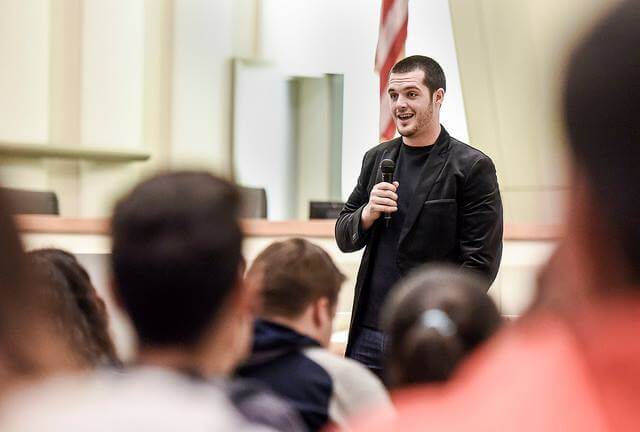 At that moment, Carr heard the Holy Spirit tell him, “Someone in here is going to commit suicide unless you say something.”

He said it was clear as day, but like anyone would do, he started questioning himself.

After a few moments of wrestling with the idea of interrupting the pastor’s altar call, Carr built up the courage to do what he knew he was supposed to do: obey the Holy Spirit.

He stood up and asked the pastor for the microphone before delivering the message. With three hundred people up at the front of the church, a man stood up and pointed to himself.

“Is it you?” Carr asked him. Crying, the man said yes and came forward.

He prayed with the man and embraced him again before looking up to see his brother praying with a different young man.

Carr walked over to join them in the man’s “five-foot puddle of tears.” They prayed with him, and encouraged him with Truth and love.

The response from both men confirmed he’d heard correctly. Carr says the experience “was amazing,” but left him completely and utterly drained.

But the Holy Spirit wasn’t finished with him yet. As the quarterback made his way out to his vehicle, a third person approached him about suicide, again telling him, “That was me.”

Again, Carr embraced a total stranger and told him “I love you. Jesus loves you… Whatever you were thinking about doing tonight, don’t do that. God has allowed you to be here tonight to hear his message and to take a different path with your life.”

Carr says he’s never experienced something so amazing in his entire life, but knows the whole thing was a result of him simply saying “yes,” stepping out in faith and being obedient to the Lord.

“That is what your job is, and He will get the glory for it.”